I came to college knowing that I wanted to do an EPA political internship, having heard about it during an info session while still in highschool. However, being an International Relations major with minors in Spanish and German posed a tough decision: Spain or Germany? In other words, travel to a new country that I’ve always wanted to visit, or go to my absolute favorite country? After much deliberation, I opted for both.

Naturally, I wrestled with the possibility of spending an entire year abroad. I worried that I would regret “giving up” a quarter of my limited undergraduate college experience. Seeing my friends post about social happenings and missing out on tournaments with my ultimate frisbee team (especially spring break) was going to be hard. However, I decided that this was the wisest course for my future and that I would not regret it in the long-run. College is great, but it can’t last forever; and I really wanted to have these experiences, not least to boost my resume.

In the fall of my junior year, I went to Madrid to intern at Fundación Mujeres, a women’s rights NGO. Although non-profit work was not something I had been initially interested in doing, the experience proved very valuable. I’m now looking into advocacy jobs for after I graduate, and I love being able to boast an overseas internship on my resume. 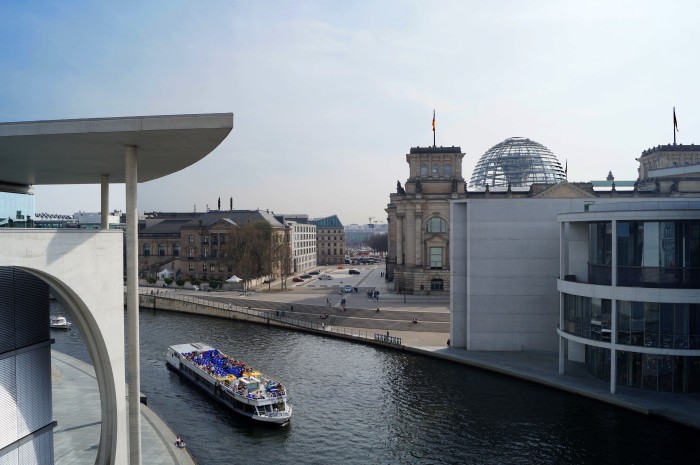 After over a month of winter break back in the US, I proceeded to Berlin in February. I had the honor of interning in the Bundestag, Germany’s parliament, with a front seat in the SPD Task Force for EU Affairs as the country faced the imminent Brexit vote, the migration crisis, and a slew of other international issues. The wonderful program director, Hartwig Prüßmann, had worked diligently to find me a fulfilling internship, and I am eternally grateful to him and will never stop singing his praises.

My times in Madrid and Berlin couldn’t have been more different. Obviously, Spanish and German cultures are quite distinct in nearly every regard (personal conduct, social norms, punctuality, food, nightlife, etc). Then there was the sharp contrast between working in a nonprofit that operates out of the same building as a taxi company and working in central parliamentary offices with occasional trips to plenum, one of which opened with a speech by Prime Minister Angela Merkel. Just as notable, though, were the arrangements of each program. In Spain, I lived with a delightful host mom and another EPA student, worked only 20 hours per week, took classes at Nebrija University, and made friends by playing on a local ultimate frisbee team. In Berlin, I lived on my own in an apartment that Hartwig found for me, interned full-time, had weekly evening tutoring sessions with an EPA-appointed professor, and befriended fellow Bundestag interns by meeting for weekly dinners.

I won’t say which semester I preferred, but both experiences taught me invaluable lessons in living independently, adapting to new environments of all kinds, and what I want to do (and not do) professionally. Yes, I felt some brief blues while abroad, missed my college friends, and am still catching up on inside jokes from last year. No, I don’t regret my decision for one second.

Send us an email at
usoffice@epa-internships.org